I do not anticipate updating this blog very often anymore.  I did want to add links to my current blogs so that any followers can update their blogrolls accordingly:

http://darkeldarblog.blogspot.com
Posted by Hobby Sherpa at 10:22 AM 2 comments:


Hello again!  It has been a while.  I still post regularly at http://www.thediceabide.com, but since this article isn't strategy per se, but more rambling / thinking out loud I figured I would post it here, too.

I am all signed up and ready for Comikaze, which will be my first major tournament since the Throne of Skulls back in June. There's only one problem - I don't know which army to take! I have some interesting choices, and while I am leaning in one particular direction, I'd rather get some unbiased feedback from any readers first.

First up is my trusty Dark Eldar - there are essentially two variants of the army that I can run. First is the tried and true Darklight spam with massed Warriors and Trueborn. This army packs quite a punch in the shooting phase but can get beat up if the game drags on too long and my 5 man Warrior squads need to hold onto objectives. My second option for Dark Eldar is a more Wych heavy list which I think will fare a little better against Grey Knight variants. Wyches are certainly more fragile than Warriors and I lose some Blasters, but the combat punch might make up for it.

Next up is my wild card - Grey Knights. I have a Paladin based army ready to go (along with a possible 6 Psyflemen Dreads). The problem is I have relatively little experience playing Grey Knights in a competitive setting and while the list is strong and plays to the missions, I'm afraid my inexperience with them will show if I face some more seasoned Grey Knight players. Overall I like this army the best from a competitive standpoint, but I'm not sure I want to be one of those bandwagon Grey Knight players (which, having never played them before this Codex, I certainly would be).

Finally, I could bring an Eldar army. I have two themes to choose from; first up is an Iyanden style Wraithguard based army. I feel this type of army would really throw the meta-game for a loop and Eldrad would certainly wreak havoc on any enemy psykers. The army would consist of Wraithguard supported by more Wraithguard, Harlequins and Vypers. Last up is my trusty Saim Hann style Eldar. I played this army mostly before I got into Dark Eldar, and won much more than I lost with them. I haven't really brought them out lately, but I think they excel in strait Win-Loss-Draw tournaments where a win by an inch counts the same as a win by a mile.

Well those are my choices! What do you think? Which list would be the most fun / most interesting to see in battle reports?
Posted by Hobby Sherpa at 8:06 PM 1 comment:

I haven't had the chance to play in any tournaments over the past two months, but fortunately June and July are full of events.

Of course August 13 is 'Ard Boyz (isn't it??) and early September brings the SoCal Slaughter GT, which I plan on attending.

Now I gotta start working out some army lists.

Also, please don't forget to check out http://www.thediceabide.com for some Dark Eldar tactica and other great articles!
Posted by Hobby Sherpa at 9:28 AM No comments: 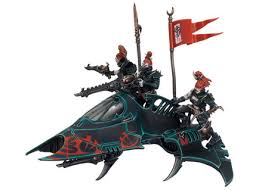 You just have to love those new Dark Eldar models, eh?  I'm planning on ordering 5 Venoms and converting my 3 Vyper based Venoms to look more like the new constructs.  With Venom based lists being the new hype (as long as you don't play against IG), I figured I might as well up my Venom count in my standard list from 5 to 8. 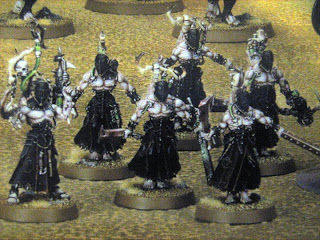 You also have to love the new Grotesque, Wrack, Haemonculi and Talos models coming out soon.  It really has me thinking about switching over to a more Coven-themed army.  I don't know that I could ever get rid of my precious Ravagers, but something along these lines might be nice...

Comes out to 1745 which gives me plenty of room to upgrade the Grotesques and Haemonculi, and even some of the Wrack squads if I see fit.

As a final note, I just wanted to remind you all that I'm posting more regularly on http://www.thediceabide.com so check it out and leave me some comments!
Posted by Hobby Sherpa at 10:16 AM 1 comment:

I'm excited to announce the formation of a new web-site, http://www.thediceabide.com

The name may have been inspired by this blog, but my buddy Adam B deserves the credit for putting this site together.  In addition to my posts here, I'll be one of the main contributors on thediceabide.com along with some of my long-time gaming buddies.

Stay tuned for further updates!
Posted by Hobby Sherpa at 9:54 PM No comments:

Well 'Ard Boyz is still a few months away, but I'm tossing around potential lists that I'd like to try out.  Last time I posted a spammy Dark Lance army, but here's a more serious variant based off what has worked for me in the past:

Still have 80 points to play with!  3 Trueborn with blaster = 81 points. Damn!  Maybe I can upgrade one of those Scourge squads to a big Reaver squad.  Oh well, the details can be sorted out later, but this is a very good starting point.

Well it's that time of the semester again where things have started to pick up.  Unfortunately when school picks up, 40k goes on the back-burner.  I can't promise many updates in the following weeks, but come mid-May, I suspect things will pick up again.  I hope to attend the Slaughter in Space along with another RTT in May.  I'm pretty much set on my list, it's just a matter of if I can get my painting done in time.

Until next time, happy gaming everyone!
Posted by Hobby Sherpa at 10:32 PM No comments:

Welcome to The Dice Abide, dude. Please feel free to leave a comment or shoot me an e-mail if you have any questions, comments or suggestions. I'm always up for some good 40k talk. Any follows are appreciated and I'll return the favor if applicable.